A Night in the Cemetery with the Paranormal Seekers and Spirits 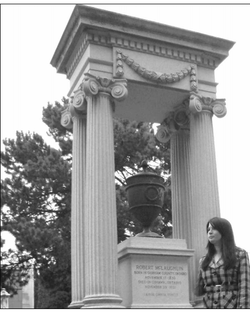 By  Katie  Strachan The Oshawa Express
​
Standing in Union Cemetery, as the wind blows, a young girl about 12 years old wearing an old dress stands across from us. Although we’re all looking in the same direction, the only person that can see her is Amanda. “Her hair is brown. Her name is Elizabeth,” says Amanda, a medium with the group the Paranormal Seekers. This doesn’t frighten her. In fact, she’s pretty used to it, although it wasn’t always this way. “I was in the psychic closet,” she laughs. “It’s always like they just jump out and it drives me crazy,” speaking of the ghosts she sees and hears. The Paranormal Seekers are a local group dedicated to understanding mysterious places, events and happenings around us. “I don’t like the word psychic. I am a medium,” she adds. Group members Rachel and Jay formed the Seekers in 2004. Today, there are nine members. Rachel, the founder, Jay, sensitive and technician, Amanda, a medium, Ron, a trained psychic, Paula, a parabolic which is a sound psychic, Jeff, the camera guy, Crystal, a psychic medium, Dan, the technician guy and Donny, the “brave guy.” “We formed the group so that we could bring out the history of Durham Region,” says Rachel. And that is just what they’ve done. The group’s first investigation was into Parkwood estates right here in Oshawa. Over the last four years of investigations, they have documented paranormal sounds and images of orbs, which are white balls of light that are typically interpreted as spirits or ghosts. A day in the life of a paranormal expert is any
thing but ordinary. “It’s like watching a movie in your head,” says Amanda. “It’s like a big puzzle that you have to put together,” adds Jay, also a sensitive. The group has pieced together some of those puzzles from investigations at local places like the Canadian Automotive Museum, ghost road in Scugog and the infamous Ghost Road Bush here in Oshawa. “We don’t go there in the dark. We wouldn’t ever go through there in the dark,” says Rachel. “It’s a major hotspot. There are all kinds of pools of water,” explains Jay, “It used to be a big spot for parties. There were lots of things that happened there.” A sign posted by the Minacs building calls the area Ghost Road Bush.
“One time we went there when it was dawn, there were spots where you would walk and it would be really warm and it was in January,” exclaims Amanda, “ There were clouds of white moths.” Ron, a psychic with the group refuses to go near Ghost Road Bush. Searching for the unusual is an intense job, which takes a lot of hard work. The group use walkie-talkies to keep in touch while conducting investigations. They also have guidelines for what the members can and can’t wear while investigating. “You can’t wear reflective jewelry or anything shiny because it can reflect light which can be confused as orbs,” adds Jay. To be sure they’ve captured a paranormal image, two pictures are taken, one right after another, because spirits are always moving so if it’s in one picture and not another, it’s most likely something from the dead, says Donny.
Although many might not care for such a job, the team enjoys every minute. “Most of the ghosts or spirits are not mean,” adds Rachel, “Chances are they do not want to hurt you.” According to the group, there is a distinction between a ghost and a spirit. Ghosts have died but refuse to believe that they are dead and spirits have passed on but come back to visit. The team gets numerous calls begging them to come and investigate resident’s homes, but this is something the group doesn’t engage in. “We don’t do house calls usually. People call saying they hear footsteps in their houses, chances are they are just old homes where the floor boards and rising back into place,” explains Jay. People often want to know specific details about the paranormal beings in their homes and how to get rid of them. “It just doesn’t work that way,” says Rachel clarifying that the Paranormal Seekers are not the Ghostbusters. Although the mood was eerie as we walked up and down the rows of graves, the Paranormal Seekers felt no fear. “Cemeteries are actually not known to be that haunted,” says Amanda, “Ghosts and spirits don’t usually come back and hang out at their grave.” That said, walking amongst the tombstones on a chilly October night makes you appreciate what Amanda feels, “The walls between our world and theirs are thinner at this time of year.” The Paranormal Seekers investigate in Durham Region, London, Lindsay and Burleigh Falls. For more information visit www.paranormalseekers.com.

Create your own unique website with customizable templates.
UA-123635661-1